On July 30, Sam Lorenzo clipped onto his bike for his first organized outdoor cycling ride with Bike 2 The Beach Ride from Washington, DC, to Dewey Beach, DE. In the six weeks leading up to the ride, Lorenzo practiced on the local W&OD trails in preparation for the 100-mile ride he had committed himself to in support of autism awareness.

“If I’m going to do something, let’s do the full thing,” said Lorenzo when asked why he chose the longest option available. He also noted that he shared information with his close family and friends through email and social media to support the event. Upon completing the ride, Lorenzo joined his family who had traveled to celebrate his accomplishment before returning home.

All the training and sharing paid off because Lorenzo completed 105 miles in 6 hours, 34 minutes, raising $2,000 for the cause. “I enjoy pushing myself physically and especially for something I care about personally. It was a great experience. My goal was to finish in less than 8 hours,” shared Lorenzo.

Like many others, Lorenzo cited COVID-19 as the reason he had the time to explore his interest in cycling. He explained that, once his bike arrived, he spent about six weeks becoming comfortable with his new wheels, exploring different trails, and preparing for the long-distance ride.

As for his next ride, Lorenzo already has his sights set on a personal trek in the Outer Banks of North Carolina during a family celebration this fall. However, when the next Bike 2 the Beach Ride rolls around, he may have more colleagues to join him!

Sam Lorenzo is a Senior Technical Recruiter with Marathon TS and works in the company’s Sterling, VA headquarters. 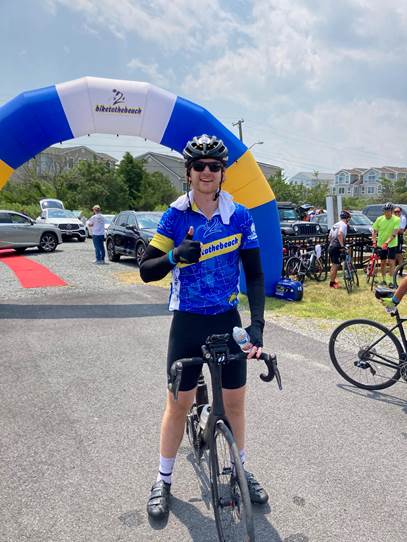